Laptops have become increasingly popular in recent years, allowing the awesome power of a PC to be carried around in a standard sized bag or case. In the last 18 months, many companies have been involved with the struggle to combine craftsmanship and the latest technology, in order to get the edge in the market. The ASUS NX90 Laptop has a fantastic sleek design, along with some innovative functionalities, which makes it one of the leading competitors in the laptops market. 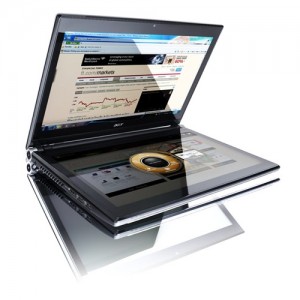 The screen is an 18.4″ LED backlit screen, able to display an impressive 1920 x 1080 resolution, giving a full 1080p HD and superb colour reproduction. Either side of the screen, custom designed Bang and Olufsen speakers give out better sound quality than other laptops on the market. The Nvidia GeForce GT335M provides a mid-range graphics quality capable of running most games without lagging. The built in Blu Ray player lives up to expectations and is paired well with the colour output and resolution of the screen. The laptops keyboard is huge when compared with many similar laptops, giving the user a keyboard which is both comfortable and practical to use. It can also come with dual track pad system which allows the user to control the laptop with either the left or right hand. The two can also be combined to allow for DJ software to be utilised to a potential never before possible on any other laptops.

Beyond its brilliant design, the ASUS NX90 also has a pretty spectacular specification. It has the Intel Core i7 processor, providing Quad Core, 4 x 1.73Ghz capabilities which can reportedly over-clock to reach a level of 3.06Ghz. It allows for seamless functionality when running Windows 7 and most other software packages. It has a whopping 2 x 640 GB internal Hard Drives, giving more space than most will know what to do with. It also comes with a TV Tuner, allowing the user to stream HD live television and much more. The ASUS NX90 is fitted with the best audio codecs, the most powerful amplifier ever mounted on a laptop and also had a resonating space that is 10x the size of any other laptop. This provides enhanced bass, louder volume and increased frequency range, enabling the user to listen to vocal and instrumental tracks with an almost live sound quality.

The ASUS NX90 Laptop is a media centre like no other. It allows for excellent functionality while running media players, has the most incredible sound system ever seen in a portable computer and had a brilliant full HD screen and Blu Ray player. Of course with all of these top of the range gadgets, processors and other perks the battery life is sure to be limited. It has a 2hr battery life during full functioning use, which although quite short, is rather impressive for something of this calibre. If you are looking for a media centre, or a laptop that really stands out from the crowd, the ASUS NX90 is definitely the one for you.