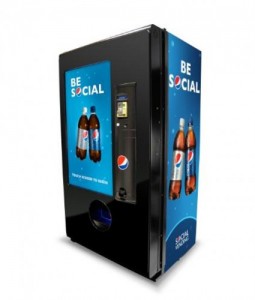 Pepsi connects to social media via Social Vending machine, a device through which you can send beverage gifts (from Pepsi, obviously) to friends.

Equipped with touch-screen interface, the Social Vending machine allows you to buy, gift or redeem a drink, or connect to the Pepsi Refresh Project. By choosing the “gift” option, you are required to choose a drink and input your friend’s phone number, along with an optional video message. They will receive your message with an attached code which permits them to “redeem the gift” at another Social Vending device. If you feel particularly charitable one day, you can also send a drink to a stranger, through the “random acts of refreshment” feature (catchy name).

Unfortunately, the machine doesn’t have a Facebook or Twitter feature, making it difficult for people to physically move to the Social Vending “just” to send a soda gift to a friend (people are generally not willing to make that much sacrifice for someone else’s thirst) but Pepsi announced they are on the works. Also, the touch screen interface isn’t very hygienic when you’re sharing it with thousands of people. But still, it’s a good move from Pepsi to climb on the social networks (literally).
Source: slashgear.com