We find impossible to find common elements of the series Transformers and the brand’s luxury phone Vertu. Well here some Asian producer of “impossible mobile” have found the common point and made the following handsets, with the name Bumblebee. 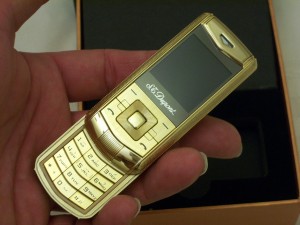 Golden Bumblebee – the smallest slider phone in the world

The picture is not only the yellow robot of Transformers, but the “golden” variant of some original phone, so called Golden Bumblebee. Obviously, the “gold” is just a paint imitating precious metal and copyright issues abound, from the Transformers logo on the back to branding S.T. Dupont, confirming that the model borrows elements from Vertu. 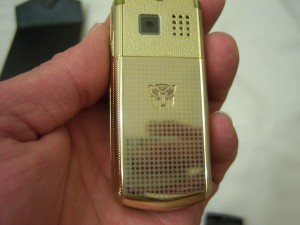 Golden Bumblebee – the smallest slider phone in the world

If you are interested in specifications, you should know that the phone comes with quad band support 2G, a 2 megapixel camera, stereo speakers, FM radio, Mini-USB port, Bluetooth and an internal memory of 8 GB. Rate this strange hybrid is 179.99 U.S. dollars and if it’s a Transformer you should wish to transform into something non-existent.