Thinking the announcement that Apple will make on January 26, which will probably be time for launching long-awaited tablet, here I discovered first list of specifications of the terminal which will be called probably iSlate. 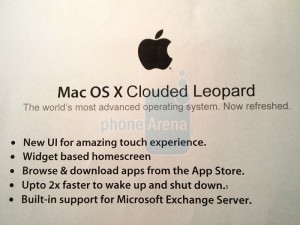 As you can see, Apple tablets comes with an Intel Core 2 Duo 2.26 GHz, 7.1-inch widescreen display with multi-touch support and a layer that protects against fingerprints, plus a 120 GB Serial ATA hard. May specifications include 2 GB DDR3 SDRAM, an iSight camera, a projector built-in, 2 USB 2.0 ports, an SD card slot, built-in stereo speakers, Gigabit Ethernet, WiFi and Bluetooth 2.1. 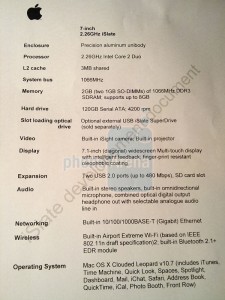 At software chapter, we find that the terminal will run on Clouded Leopard Mac OS X 10.7, a platform based on Widgets (at least in the Home screen), with advanced functions touch, App Store support for low boot and support for Microsoft Exchange Server. Note that these facilities are not set in stone and changes could occur, we hope, the chapter of diagonal display size in particular.